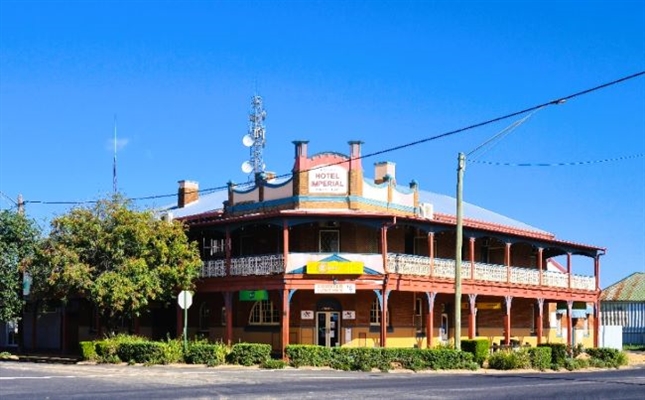 
The Imperial Hotel built in 1916 occupies a prominent position in town on the intersection of the Mitchell Highway and town's main street.

A classic two-story hotel, the verandah catches the eye as you travel into town. The 10 hotel guest rooms open onto the verandah, catching the breezes and views. The hotel includes a convenient single bar operation, ample seating in the dining and function rooms, Keno and TAB (only TAB in town) and a large outdoor beer garden with both paved and grass areas. Included but alongside the hotel is a separate shop, which has previously been a cafe and a pizza shop. The opportunity exists for this highway fronted shop to be leased out or run in conjunction with the hotel.

The quaint township of Trangie, punches above its weight, when it comes to drawing visitors.

Situated on the Cobb & Co Heritage Trail, which was established to celebrate the 150th anniversary of Cobb and Co's 1st journey, Trangie features in its own brochure and still has the old staging post in town.

Other drawcards on display around town are an antiaircraft gun, navy submarine torpedo and the town's old fire truck a 1918 - Garford fire engine.

On the eastern edge of town is the Goan Cowal or Waterhole which is "Home of the Big Billy".

The Imperial Hotel's current vendors have cared for this classic hotel well, but are now ready for retirement, opening the opportunity for new owners to put their stamp on this profitable business.

So call us today